Opinion: Is Bluehost the second worst hoster out there?

Opinion: Is Bluehost the second worst host out there? 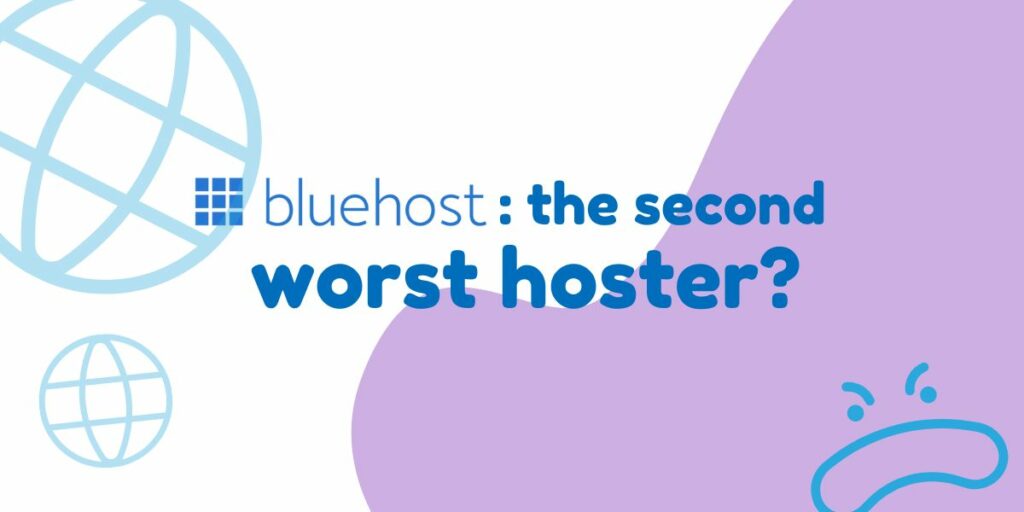 Everyone who reads the hasOptimization blog knows that I make no apologies when it comes to how hard I drag web hoster GoDaddy for their web hosting offerings, whether it comes to their price gouging for SSL certificates, charging for services that don’t actually do anything, their poor security, or any variety of shady business practices they have. However, I’ve never been public on the blog about my dislike of Bluehost as a registrar and a web hoster.

Based on my experiences with Bluehost, I’d never recommend them to anyone.

The client who was moved

Just a few weeks ago, I was involved with an emergency migration of a WordPress site from Bluehost to a trusted hoster. According to the client, Bluehost had moved the server in which the website resided not once, but twice, and failed to inform the client that they had done so. Because there was a special DNS setup involved, the client did not know to update the A records for the new server’s address, so the client’s only source of income — their valuable website — was offline for quite some time before someone noticed.

While it is entirely possible that an email did go out, and the client deleted it, or it went to spam, what then happened next further solidified for the client their desire to move away from Bluehost as quickly as possible. Most WordPress migrations really only require a solid backup of the database and the website files itself. We’re making an archive that can be downloaded, then uploaded to the new hoster. I was tasked to complete the migration. In the six hours I attempted the migration of this relatively small site, every time I attempted to access the website, the server would either time out, or would have a problem connecting shortly after I began working on the site.

This is not anything bizarre, honestly. On shared hosting, I see this all the time — an overloaded server running too much ends up with sites fighting over slim resources, and the server just gives up and restarts. This results in connection timeout issues, 404s — all kinds of weird behavior. But the client had noted that the website had been moved to a new server, and suddenly was experiencing increasing problems actually accessing the website.

I took a backup of the database, then went to archive the files. Archiving went fine, but when I went to download them, the connection would interrupt and I would lose my download progress abruptly. I ended up with archives that were corrupt, incomplete, and empty — nothing I could upload to the new hoster. What I ended up doing was archiving the files into smaller bundles so it was less likely they could be interrupted, but the proper method would have been to use FTP to retrieve these.

The problem was I could not connect to Bluehost’s file manager or connect via FTP. The server was obviously down, and would not accept FTP connections.

When I brought it up to Bluehost support, they told me they could make a backup I could “retrieve later” and when I declined, they told me to try accessing the file manager on my mobile phone.

The client who couldn’t transfer their domain

This is not the one and only story I have about Bluehost, however. Just a couple of months ago a client came to us because their website inexplicably stopped working. After reviewing their SquareSpace site, it was easy to determine the problem was with the registrar, and not with SquareSpace. Bluehost had modified the DNS — of its own accord — in a way that left the domain with nowhere to go. After fixing the issue, the client decided to move the domain out of Bluehost.

Here’s where things got strange: We began to initiate a transfer for the client to a new registrar. Registration transfers should be cut-and-dry: get a code from the old registrar, and bring it to the new registrar, then wait. We unlocked the domain, removed privacy settings on the domain, and retrieved the authorization code. We went to the new host and put it in for transfer.

Almost immediately, the domain declined transfer due to an “incorrect EPP code.”

After retrieving another EPP code (different from the first), we tried again. Immediate failure. We tried at least five separate times on separate days with separate users, all of which used the EPP code provided by Bluehost — each one different — and each time it was declined. On Bluehost support, we received an EPP code that declined the transfer. Finally, by some grace of the universe, the receiving registrar seemed to catch it on a good day, and the transfer went through.

Or so we thought.

A week or so later, the site went down again. When we spoke with our new registrar, they told us to talk to Bluehost. When we told them we should have nothing remaining with Bluehost given the registration was transferred to them, they were able to ascertain that information was not properly updated with ENOM to name the new registrar. Nothing we could have done on our end to have had this work properly, but we did, in the end, escape Bluehost’s grasp.

These are just two instances of client issues we’ve dealt with regarding Bluehost, out of a multitude of problems I’ve had dealing with Bluehost hosted sites, and I’m not the only one. Even when everything is working with a Bluehost site, I find their shared hosting to be unbearably slow, and their backend to be incredibly clunky and confusing. Support doesn’t seem to know much of anything about the issues at hand or how to resolve them (telling me to try to use file manager on my phone says enough to me). Downtimes seem to be common, and for the layperson, the cPanel environment and having to juggle multiple logins because of it can be horrendously confusing.

So why is everyone recommending Bluehost?

The thing I can’t wrap my head around is the fact that Bluehost is recommended by a variety of people, including technology populars like TechRadar and CodeInWP.com. Whereas everyone knows at this point that GoDaddy is a bordering on being a scam, Bluehost is still continually recommended as a good place to set up your WordPress site. Why?

It comes down to money. It seems that affiliates are inflating the average score of Bluehost for obvious profit reasons. It’s never good when a hoster needs to pay people to sing their praises. I’d be happy to talk about our preferred hoster and how much we love them, and they definitely don’t pay me, but I’ll save that for another post. Still, it’s sad to see so much of the internet is rife with paid affiliation — including WordPress itself, because Bluehost does pay back into the CMS’ system. Unfortunately this means being doubly careful, because who knows how many other hosters out there participate in the exact same practices.

If I can recommend getting you away from Bluehost, or not signing up with them to begin with, I would highly recommend that now. Stay away from HostGator while you’re at it. 😉

But what can you expect from an EIG owned company, after all? Remember, if you can, avoid EIG — you can use this handy list to see if your hoster is an EIG company!