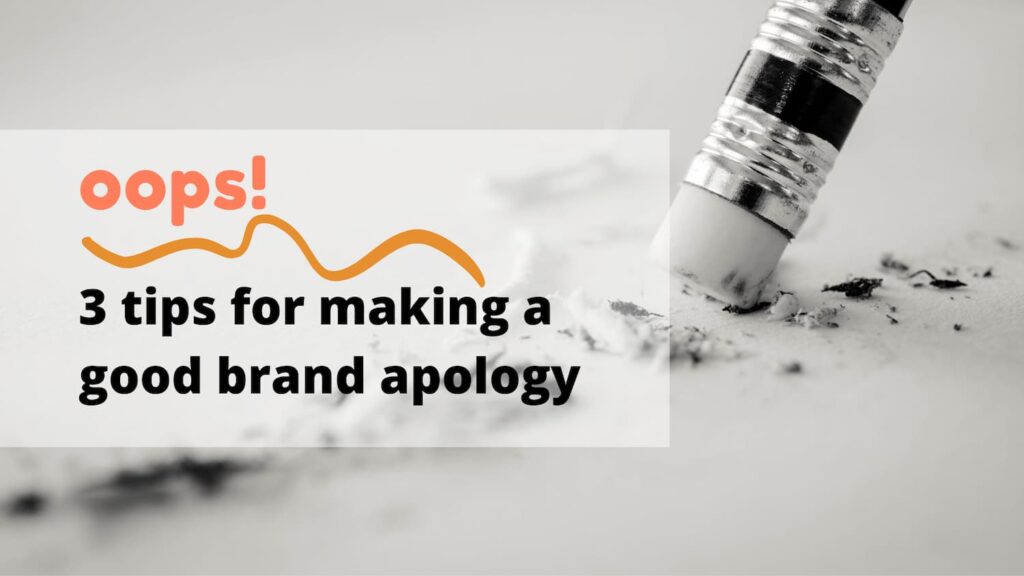 Everyone messes up at some point or another. We are all human, and because of that, things can — and do — go wrong. No matter how big or small your mistake may be, at some point in time as a business owner, you are likely to have to write some sort of apology to your customers and the public as a whole. Whether your mistake can be eschewed with a simple “we are sorry for the inconvenience” or requires something more in depth, you’ll really need to put pen to paper, so to speak. Writing a brand apology really is an art form — you have to juggle a lot of aspects when drafting it to ensure that you come off apologetic and sincere. We’ll help you draft the perfect apology with examples of bad apologies, good apologies, and our three best tips.

We’ve all seen them. Bad brand apologies are easy to spot, and are a dime a dozen.

Here are some perfect examples of bad brand apologies.

After firing all employees en masse at a location in Salem, NH in 2021 due to talks of striking/protest for better working conditions mid-pandemic, Bull Moose Music issued the following “apology”:

“We are sad to announce that we have temporarily closed our Salem store. We are not able to share the reasons behind our decisions regarding the Salem store as it is important to us to protect the confidentiality of our former employees. We can, however, say we are confident this decision was in the best interest of our customers, employees and business as a whole. We can also say emphatically this decision had absolutely nothing to do with masks or face coverings for employees or customers. The decision in itself is heartbreaking, but we stand by it as the correct course of action to move the business forward for the community. We apologize to the greater Salem community for closing temporarily and will reopen this store as soon as we can, with as many as people as we can. We sincerely hope that you remain our customers.”

After considerably failing to meet expectations with their video game Cyberpunk 2077 and releasing an unplayable video game after years of constant push backs on the release date in 2019, CDPR released this “apology”:

In 2019, at BlizzCon, video game developer Blizzard got on stage to apologize for how they handled Hong Kong and their (continued) protests to be freed from under China’s thumb, specifically players from Hong Kong and the banning of one player in particular. Blizzard issued this “apology”:

“​​I am sorry and I accept accountability. What exactly is our purpose? BlizzCon is demonstrating it as we speak. We aspire to bring the world together in epic entertainment. I truly believe in the positive power of video games.

When we get it right, we create a common ground where the community comes together to compete, connect, and play, irrespective of the things that divide us. BlizzCon has people from 59 countries all around the world at the show today. That is amazing. That is the positive power of video games — to transcend divisions around us. We will do better going forward. But our actions are going to matter more than any of these words. As you walk around this weekend, I hope it’s clear how committed we are to people expressing themselves.

We’ve seen many of you expressing yourselves this morning.

Today you’re going to see a lot of the hard work of the Blizzard team. I am personally so proud of what we are building and I hope you love it too. Thank you for joining us.”

What they did wrong

You’ll notice that most of the company apologies for these brands do one thing: they shift the blame from themselves to someone else. Whether it’s throwing one of their own employees under the bus, or trying to blame it on another factor entirely, the biggest reason these brands failed in their apologies is because they give excuses. Excuses seem shifty rather than sincere, and sincerity is what you want most when drafting up an apology.

How to write a good brand apology

“A solid brand apology — like any other apology — should be sourced from sincerity,” says professional copywriter Amanda Silva of Waypoint Writing. “People build brands and people make mistakes. If the mistake came from genuine ignorance, own it; however, don’t lean on it as an excuse for the offense. Demonstrate honest remorse by acknowledging the issue and then commit to further education and advocacy. Critical caveat: you need to walk the walk and actually evidence changes or steps your brand is taking to truly be and do better. Consumers are paying attention, perhaps now more than ever, and lip service will only land you in more trouble. Words matter and are made more meaningful when animated by real action.“

It’s easy to break your brand apology down into parts using this guidance.

The saying is, everything that occurs before “but” is negated. If you issue an apology that says, “We are sorry, but…” you’ve already started writing a bad apology. Say you are sorry, and explain why you are sorry. Say you’re sorry. Actually apologize! You’ll be surprised by how many brand “apologies” you will read that never actually apologize. They often just speak around the issue and say a lot of words that leave you scratching your head. Make sure to be the brand that apologizes, and apologizes sincerely.

When Lush UK was discovered to have made donations to an anti-trans organization in 2019, Lush UK issued two apologies. The first read:

“To make our stance clear, we do not believe that trans rights are a threat to women’s rights.

Our belief is that a decent society should be able to structure itself to give rights and protection to all who need it.”

This apology was not enough, but it did give Lush UK time to formulate a good apology:

“To trans people and allies, we wish to say sorry for some past mistakes in our choices of donation recipients.

For those of you that have joined this conversation from different places and have been left wondering whether Lush has deliberately funded campaigning against trans rights, we want to assure you that this would never be our intention and we are sincerely sorry that any of our funding has gone towards doing this.

The normal process for Charity Pot is that small grassroots groups and campaigns submit an application giving details about the project they wish to undertake and some background information.

They are also required to give the name of two referees who can vouch for them. On top of reading the application and speaking to the referees, we also always check out the website and any group social media accounts. Where possible we also try to see what sort of content is on personal social media accounts of people attached to the group, where any names are known.

There is never going to be a system that eliminates all mistakes, but we really take due diligence seriously. In the case of these two donations, we feel that money has gone to work that we would not feel proud to support and we wish to apologise unreservedly for that. We can assure you we are looking at all we do to try to strengthen our processes against further mistakes.

Over the last five years Charity Pot has given grants to 514 LGBTQ+ groups totalling £1.6 million. Our intention is to continue to fund the many wonderful trans groups that come to us needing help to stay safe and to fight for acceptance and we hope that this has not put you off applying.”

If you can, avoid throwing individual employees under the bus and instead talk about your company as a whole — as “we” — and explain your processes. Even if an intern messed up an email and sent a blank email to thousands of people, it’s likely they feel bad enough about the mix up. Throwing them under the bus will only make your employees feel like you don’t value them and are willing to point the finger at them. As a company, you should do what you can to shield your employees and take the brunt of the force, if possible. “A technical error”, while vague, is more empathetic than “the intern did it.” Better yet, you can get really human and say: “We made a mistake that unfortunately caused blank emails to go out to everyone on our list. Mistakes happen and we’ve all been there! This particular mistake allows us to re-evaluate our email-sending practices to ensure that only emails with content will actually go out. Our mistake has helped us realize a flaw in our process that we are happy to have resolved.” Usually, people will understand, like when this intern sent a test email to HBO Max subscribers by accident.

#3: Explain how you’re going to do better

It isn’t enough to just apologize sometimes. While in the case of the flooded building or the blank emails, an apology should suffice just fine, sometimes your mistakes can be big — really big.

When Barilla chairman Guido Barilla said on national radio in 2013: “I would never do a commercial with a homosexual family, not for lack of respect, but because we don’t agree with them.” Barilla pasta went into a tailspin. Homophobia is not a good look for any brand, nor did the statements of Guido Barilla speak for the entire Barilla company. Barilla execs needed to spring into action. While social media laced into Barilla about the chairman’s words, Barilla CEO Claudio Colzani began cleaning up the damage done by a singular statement (later clarified, but not in any better sense). Guido Barilla apologized almost immediately (but not well), and Colzani instead pivoted into proving that Barilla pasta was not homophobic. For the next eight years, Colzani put Barilla’s money where their mouth was on their apology. From there, Colzani worked hard to uplift the LGBT community and “do better.” And people recognized it for what it was.

Sometimes doing better is “making an action plan to serve our community better,” and sometimes doing better is “fixing flaws in the process.” Each “doing better” will be unique to your company and the issue at hand, but you need to determine a plan of action and stick to it. Cleaning up your reputation from a one-time ordeal will take far more time than it did to trash it, but you need to persevere. Prove to people you are not who you seemed to be through both your words and actions from there on out.

What are your favorite brand “apologies” or actual, decent brand apologies? We want to hear them! Let us know in the comments.