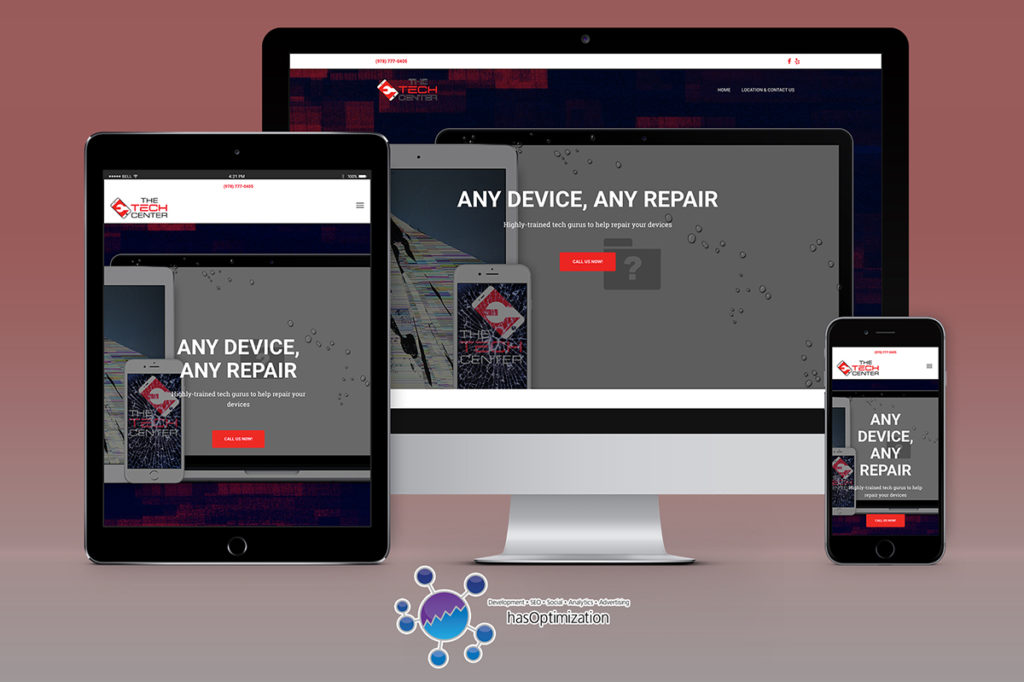 hasOptimization is proud to announce the launch of another new site. Tech Center Danvers is a tech repair kiosk located in the Liberty Tree Mall in Danvers, MA. They repair phones, computers, and even video game consoles! Yes, they’ll even repair iDevices including MacBooks and iMacs.

hasOptimization acquired this client just as he was taking over the business from a previous owner. Wanting to make his business as ship-shape as possible, the new owner Kyle quickly set to work with optimizing his website, social media, and more. Tech Center Danvers’ site was previously a single-page site hosted on SquareSpace. While we love for business owners to get their hands dirty with DIY and create some sort of web presence for themselves, Tech Center Danvers’ site was not the greatest. It gave all of the information necessary to visitors, but all of the information was on a single page, which is detrimental to SEO. Along with hosting everything on one page, all of the content was placed as images rather than text, which means the only thing Google was indexing from the page was the single piece of text in the one-page navigation: “home”.

Kyle had to make significant changes to the text within the images. Rather than modifying the existing SquareSpace site, Kyle said he was not married to SquareSpace and found it difficult to make changes properly, so we asked if he wanted to move over to WordPress. Kyle quickly agreed — he had seen a competitor’s website and very much liked it, so much so that he wanted to make it as similar as possible. Since the competitor was using a pretty typical layout, it was easy to bring the competitor’s look and feel to Tech Center Danvers’ new site, along with some customizations specific only to Tech Center Danvers.

Tech Center Danvers also underwent a significant logo redesign. In keeping all branding consistent, we were able to update the new website with similar branding look and feel to make the logo feel at home on Kyle’s new website. Overall, Kyle is walking away with a brand new WordPress site with a layout he wanted, slick looking content, the ability to expand pages easily and improve SEO, as well as SEO we built directly into the website. On top of it all, while we were reviewing his systems, we found items he was being charged for but not using. Kyle will be going from paying $18 a month with SquareSpace hosting (and also paying $8 for GoDaddy Hosting he was not using) to much, much less, saving him money in the process. Count this as an all-around win!